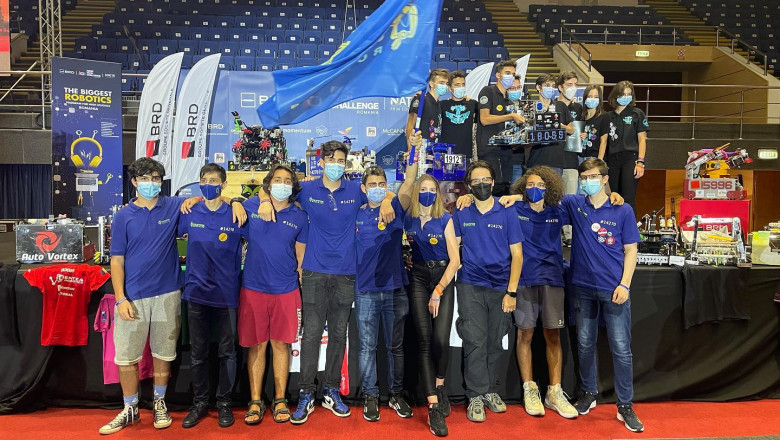 On August 30, the national robotics championship BRD First Tech Challenge Romania took place, organized by Nation Through Education, in which the best 24 teams from Romania participated. The Quantum Robotics team, made up of 12 members passionate about engineering and programming, won first place after the qualifying matches, first place after the finals, as well as the most important prize of the competition, Inspire Award first place, a success that includes both a high-performance robot in the field as well as the general activity of the team.

The competition took place over 2 days, the first representing the interviews with the juries in which the teams presented all their activity from the 2020-2021 Ultimate Goal competition season. At the Polyvalent Hall, the field competitions took place in which Quantum Robotics qualified for the first place with a score of 1385 points and, as captain, managed to form the alliance that won the final.

Each field match lasts 2 minutes and 30 seconds and consists of 3 parts: 30 seconds of autonomy in which the robot must make its own decisions, followed by 2 minutes of remote control. The theme of the competition changes annually, the challenge of this year being the launch of rings at different heights.

The last 30 seconds of the remote control period are called “end games”, during which the robot must transport 2 large game elements off the field.

“Quantum Robotics is a team that participates in the” FIRST Tech Challenge “robotics competitions in various countries. The team was founded in 2017 by a group of Olympic students in various subjects such as computer science, mathematics, physics, chemistry, robotics “, it is shown in a press release.

FIRST is recognized worldwide as the most important multidisciplinary STEM (science, technology, engineering and math) involvement program in the world, aiming to offer high school students the opportunity to apply integrated concepts to solve complex robotics problems, but also to develop their teamwork skills, as well as the desire to help others through mentoring and volunteering activities.

The FIRST Tech Challenge program is organized in Romania by the “Nation through Education” Association. The program has been developing non-stop since 2016 and currently has over 160 robotics teams from all over the country.

Oradea Tech Hub launched at the end of 2020 an acceleration program for start-ups...